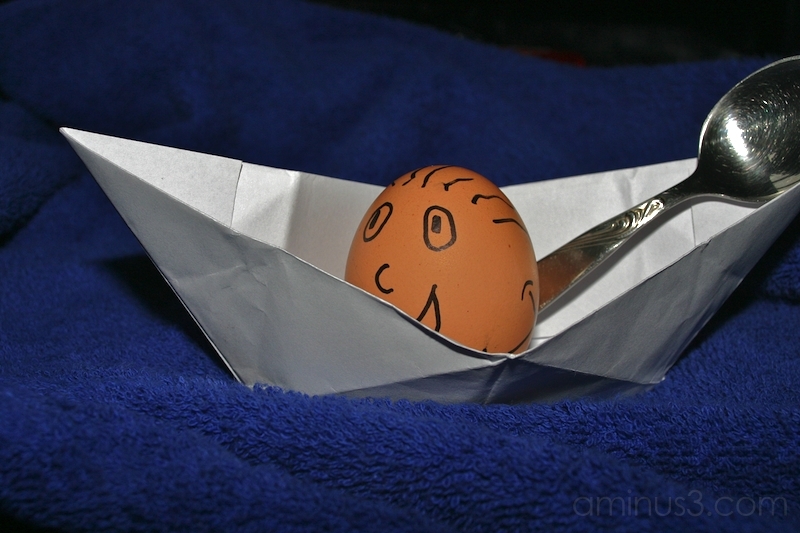 Posted by MadScientist (Düsseldorf, Germany) on 27 August 2008 in Miscellaneous.

Q: Many thanks, MadScientist, for attending our non-price competition "One egg and one spoon" by Isao, an Aminus3 photo blogger! May I look at your contribution?
MS (unveils his photo): Voilà.
Q: Um, well, ... Ha, ha! ... Er, what have we here... it's a - it's a - er...
MS: This is Egg and his friend Spoon, conquering the sea. I planned to have a shooting with them at the original location but time and budget were low. So I had to improvise.
Q (regaining his composure): I see, I see. Yes. They seem to have a good time.
MS: Absolutely. They were a great team and we all had a lot of fun.
Q: Did you experience any difficulties?
MS: Well, yes, the construction of the ship was more complicated than assumed. I tried various designs, then we were running out of paper, and I had to use what we had developed by then.
Q: Anything more?
MS: Yes, the light was difficult. I planned to do an outdoor shot, but it was raining. That would have ruined the ship, so I had to improvise.
Q: I see.
MS: And Spoon got a bit seasick. But he's fine again.

According to an idea by Isao!

hehe -- yes! an awesome presentation and accompanying 'interview'! ;) just brilliant -- i kept thinking to myself, what am i going to do?? i took it very seriously -- but this is a faabulous idea -- playful and fun! bravo!

@dj.tigersprout: This is an example of famous German humour. :-D

Great idea and good sense of humour. The painted egg and the spoon as a padle is great, as is the paper boat to compose. Very good.

@Paco Díaz: Well, to tell the truth... It looks like an imporovisation, but actually it took hours persuading them to enter that boat. Really... ;-)

@Ana Lúcia: Mission accomplished: both of my models now have their model contracts and you'll see them in any magazine near you soon! ;-)

lol hahahahah!!!! great one MS, obviously part of the egg and spoon challenge....thats the one for me...you win hands down:-)) If there has to be a winner that is, otherwise you are all winners!! great show Bravo

@Linerberry: Haven't seen every other image of that contest up to now, but I bet that my models had most of the fun during their shot! :-) Thanks a lot, Linerberry!

that's a cute little boat ... I like the captain !

@Namaki: He was very cheerful, thanks! :-D

A wonderful fun image in the "one egg, one spoon" theme today, well done, it made me smile!

@Kylie Greenan: I'll see if I can hire them for another shooting! :-)

Needed to think of it ! Excellent stage setting.

@dan: Thanks, Dan! That wouldn't have been possible with the help of these two great performers! ;-)

Excel! the concept brilliant and is stuffed with humour

@Morgane: I told this to my models and they were very happy. ;-)

MS this is brilliant, what a fantastic idea, so creative too!

A funny & naive interpretation of the today theme, well done, makes me smile...

@Evelyne Dubos: I was heavily inspired by my Tegernsee images. :-)

Isao is right, it is the funniest one. I love your Mister Egg.
Without reading your comment, I would have thought that the spoon was the oar. Sorry M. Spoon for the mistake ;o)

Hehehehe~Hahhahahahah~Hohohohoho You crack me up. Oh, no pun intended towards the egg... ;0)

@Tracey: Mr. Egg has left the stage and returned to the fridge! :D

@jamesy: Glad you like it, jamesy! Thanks a lot!

Lol ! Your interpretation of the subject is really funny !

I didn't take part this time, but I will take a photo for the next theme on September 10th !

@Yeuse: That's something with a blue foot, right? I'm looking forward to your one! ;-)

On the plus side, now that you've taken the photo, the ship can double as a hat.

@Twelvebit: In the end I dumped this ship in Lake Towel.