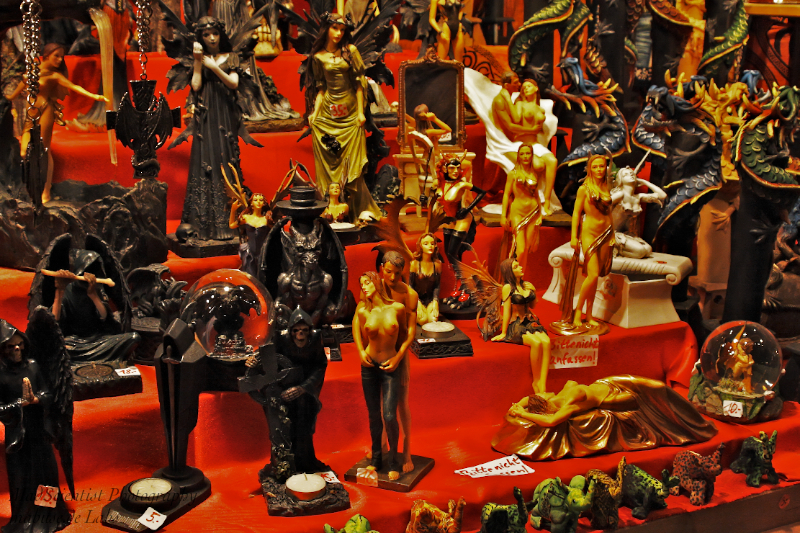 Posted by MadScientist (Düsseldorf, Germany) on 16 December 2008 in Miscellaneous.

On our journey through the wonderworld of German Christmas fairs we have to face a harsh truth. It's rule #2:

It's called a Christmas fair, but don't expect Protestant profoundness here: the Weihnachtsmarkt is something that people from Bavaria would call a Gaudi, an opportunity for having fun. So it was no wonder that the refrain of a song we took notice on one of the fairs was "Hosianna everywhere!" (perhaps it sounds more funnily when sung in the typical Rhenish idiom that for most people sounds like a strange singsong). While strolling about a Weihnachtsmarkt at Cologne's Rudolfplatz we found this eclectic composition of figurines, depicting the eternal struggle between Eros and Thanatos. (Of course you can also buy nice pottery, Christmas tree balls, and crib figurines. More about this tomorrow.)

@mat: This booth was somewhat unexpected. :-) Thanks, mat!

Ooo I say...very risqué ! Funny what people will buy !!

There are only three figures that I like... you can keep the dragons and devils.

@Observing: There were many more, but this was the most interesting corner of the selling place.

WOW! I think my husband would be hovering in this corner of the fair! Great shot!

@Tracey: Great, he could join me and buy some silly things. Har har. ;-)

There is one figurine that I like but my wife won't be happy if I bring it home :)

@akarui: I would buy two different figures, this would soften the irritation a bit. :-)

So beautiful, in the Christmas spirit!

Yeah - these dont look like Christmas figurines. I would like to visit Germany - but I guess not during this time of year??

@PD: You shouldn't visit Germany from November to March.
1. It's dark, wet, and cold.
2. During Advent time cities are crowded, crowded, and even more crowded.
3. At Christmas the country is virtually asleep.
4. Unless you don't hate carnival, you might dare a visit in late winter, but you have been warned!

this is a much more intriguing Christmas theme than i am used to -- ;) much 'warmer' i would say too!! wonderful color!! and intriguing figurines!!!!

@dj.tigersprout: It's that warm that some of the figurines were forced to take their clothes off! Climate change! ;)

Oh my! It is interesting what you found at this Christmas Fair!

I guess anything goes, would have never guessed that the figures are sold at a Christmas Fair.

@JoeB: They came a bit surprising to us too. But that was the only booth with that somewhat different assortment. :)

I'm thinking I might dispense with the tree, tinsel and garlands this year and just have the one central figurine . . . but the chances are Observing has taken that one already !

unexpected things you founded for a Xmas market

@Laurent: Ha, you bet! (But we didn't have to search for a long time.)

You've got lots cooler shit over there than I can ever find around here. I really like that couple figure center forward.

Ooops! There no Heaven here! much more like peeping in Hell.....biut..the Angels in Hell don't look that bad,either!

@Japanalia: A few days later some of these figures were sold - the seller couldn't be completely wrong! :-D