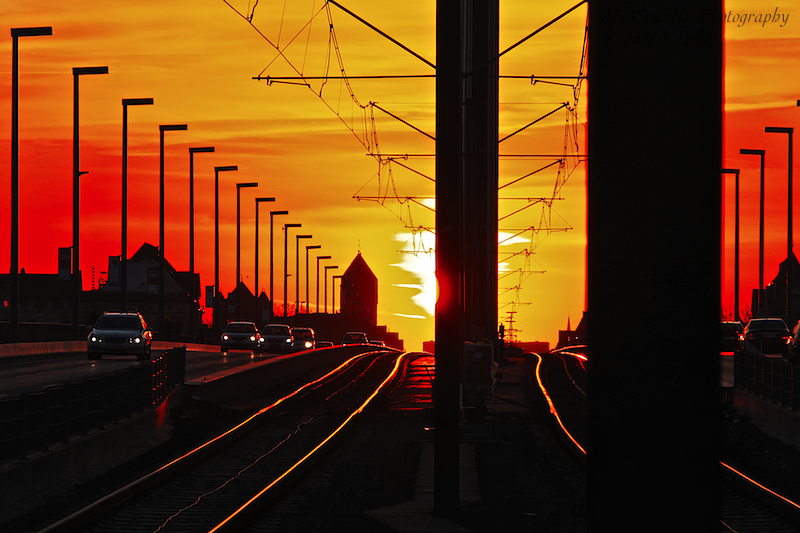 Posted by MadScientist (Düsseldorf, Germany) on 5 April 2009 in Transportation.

Regarding all these bank bailouts and the usual justification politicians and experts specify ('If banks are falling, the whole business system will fail.'), one could ask if really every bank is system relevant. Let's discuss this thought.

Actually there is enough money floating freely in the world. If enterprises or countries got caught on the credit crunch, then it's not because of too few money but the loss of credit, or trust. As of the mid 1970s and after the Bretton-Wood system with its monetary policy that maintained the exchange rate of currencies within a fixed value, the neo-liberal movement provided for an enormous amount of money. New financial products, like hedge funds or 'shadow banks', the rapid increase of financial gains, were the method of choice; while expected rates of profit increased from 10 percent of equity capital to 25% and more. The growing divide between rich and poor and the disposition for a life on the nod provided for a growing global glut of money. When in 1980 the world-wode real economy had advantage over business finance at a 2:1 ratio, this changed in the meantime to a ratio of 1:3.5. So we can state that there is indeed very much money in the markets.

This plethora of money is looking for lucrative investments. As long as rates are increasing and fresh money keeps coming in, this system profitably works, of course at the expense of the real economy and the surplus value it creates. Even without the recent financial crisis, the economical crisis reveals the bloated financial capitalism as Ponzi scheme.

The glut of money allowed banks to expand sharply. Germany, for example, has 2000 banks and savings banks. The balance sheet total of Deutsche Bank accounts for more than 2000 billion Euros, barely fewer than the GDP of Germany, thus showing the scale of money transaction. De facto the recent crisis is a crisis of overproduction in the financial industry, where needless money was pumped into needless financial products.

So why not let foot the bill all these who backed the wrong horse: the reckless players, gamling bank managers and ripped-off shareholders? Because of the jobs? They could be saved with considerably less money. No, politicians say, the banks have to be saved because of their relevance for the financial system and the national economy.

Agreed, without financial services, economy wouldn't work properly. We couldn't draw money from our giro account, and most companies wouldn't survive without credit payments. But not every all-purpose or special-purpose bank is equally important for that system to the same extent. Perhaps the system would continue working even better with fewer banks? The domino effect that would make other banks fail as well (a popular doomsday scenario bankers and politicians like to point out) wouldn't be much of a problem - a bank that goes bust because of the bankruptcy of another should have lost its license long before.

In fact the real purpose of many bailouts aims at a national industrial policy in favour of the international operating banks, as the collapse of a big bank would cause a competitive disadvantage against the banks of other countries. When it comes to secure the stability of the financial market, usually the dispossession of a bank is considered "ultima ratio", but the opposite, the insolvency of a bank, would be the method of choice. In fact quite the reverse is true. Confiscating a bank, establishing new guidelines, exchange of management, a qualified control under participation of the staff, would not only socialize the losses but also the gains that would reappear in the future. (via)

A powerful and graphic shot. Love colors in the sky (probably a filter ?, but suit very well...). Great one MS !!

@Evelyne Dubos: A bit more red than actually happened. :-) Thanks!

@chrissy: A zoom into this scene.

I think one can sum the whole story up in a word - corruption..! Underhanded dealing within the banks, top directors cutting their own pension and bonuses, government ministers who are part of failing companies.... the whole lot stinks, and ordinary people like us have to pay for their greed. Tell me, just where are these 'Billions' coming from....? Who can afford to lend such vast amounts..?

The media reports that the UK is bankrupt, yet today I've seen hundreds of people having their coffee and donuts, buying shoes, buying hifi systems, just as if nothing had changed.

@observing: I think there are two possible reasons for people to continue spending their money: 1) they still didn't get it, and the crisis didn't catch up yet with the bigger part of society (something that will change rather soon, just look at your unemployment statistics); 2) they did get it and they spend all their money while it's still worth something, as our big G20 leaders also plan to spend a very big amount of money. 5 billion / trillion dollars? From a certain number of zeroes on it doesn't matter any longer. Oh, the money is coming from us, of course. And of our children, grandchildren, ...

I don't have the courage to read your whole article, but your capture is wonderful !

amazing and strong colours in this shot and good composition along the tracks which are great fro the eyes to follow! i am not sure whether it was possible to avoid the pole on right as it is just a tad distracting but a nice shot nonetheless...

@DarkElf: I was standing on the last legally possible point of the bridge, that pole was right in front of me, no chance to get rid of it... :-)

@PD: I'm always surprised to see how crooked they are. :-)

WOW ms!!! This truely is one of your most fantastic of images!!! Superb!!!

With the 2 previous pictures and this one you have a nice serie of very different perspectives. I love the colors of the sky.

@akarui: One day before I made this shot the shy was even more dramatic. We returned to the bridge only for having a second chance, as I didn't have my camera at hand the day before.

@Twelvebit: I did get it and just started sacking England. Lots of books and dishes there! :)