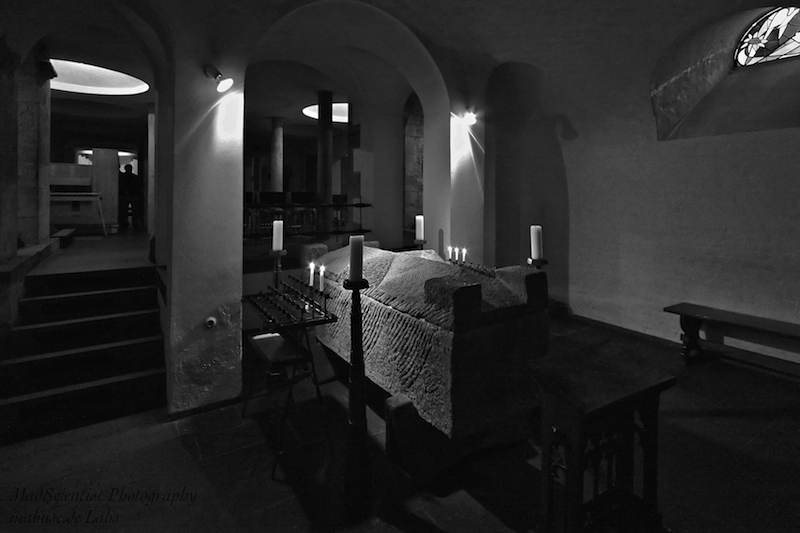 Posted by MadScientist (Düsseldorf, Germany) on 28 May 2009 in People & Portrait.

Speaking of Albertus Magnus, let's have a short visit to him. Albert (also: Albertus Teutonicus; Albertus Coloniensis; Albert the Great, Albert the German, Albert von Lauingen), polyhistor, philosopher, jurist, natural scientist, theologist; Dominican und bishop of Regensburg. Being a bright light in the Middle Ages, he later was recognized as Doctor of the church and got the honorary title 'doctor universalis'. His 70 treatises and books would fill ca. 22,000 printed pages, a treasure that is still evaluated incompletely.
An important consequence of his works is the foundation of Christian Aristotelianism, thus of scholasticism and eventually of modern natural science. His compilation 'De animalibus' listed 113 quadrupeds; 114 flying, 140 swimming und 61 creeping animals as well as 49 worms. Referring to Aristotle, he explained that also the lower animals deserve attention, because of the need for researching their variety of forms in order to praise their creator and his act of creation. (No, we are not talking about 'Intelligent Design' or creationism here. I don't think that Albert's spirited wit would have supported this caricature of medieval thinking.)

Albert's tomb that you can see here is in the crypt of the Dominican church of St. Andreas in Cologne, and his relics at the Cologne Cathedral.

An impressive place MS and an informative commentary too, love the lighting and b&w is a great choice.

@MaryB: To be honest, the coloured version wasn't too exciting, as the light was very yellowish and the sandstone just took on the same colour. :-)

A simple tomb, without any sculpture.

@António Pires: That's consistent, as he was member of a mendicant order.

Great B&W, we can feel the solemnity of the place.

@Evelyne Dubos: A sharp contrast to the colour-saturated church above that crypt.

excellent tones here - so crisp and the light so clear!! a bit spooky though... :)

@dj.tigersprout: You think so? The ceiling was a bit low, but otherwise it was a clean and well-plastered room. I think the old man won't do you any harm. :-)

I love the ambience created here with the candles and lights. The B & W treatment adds a sense of solace to the room. Great narrative!

@Steven: Thank you, Steven! Great spirits are seldom found at all times, especially today we could need one or two of them.

There is a mysterious atmosphere. I am not sure the stairs were necessary unless you wanted to give the sense of underground. I personnally prefer the variation without that part.

@akarui: You are right, maybe I should have come closer to the tomb, but I was unsure about the best angle. I will have to practice this more often.

I like the B&W treatment. Hope you didn't alienate any of your American viewers comment about "intelligent design." While science education here is already sort of a joke --aided perhaps by the misrepresentation of everything in science by television and film (who, for example, in the general public, can possibly understand Newton's Laws after countless false depictions)-- the saddest joke of all is education in biology, particularly as it pertains to the concepts of natural selection.

@Twelvebit: If anybody was alienated, (s)he didn't let on about it - after all, this is a Catholic blog. :-)
(By the way, if I would criticize Darwinism, I would use the insights of epigenetics.)