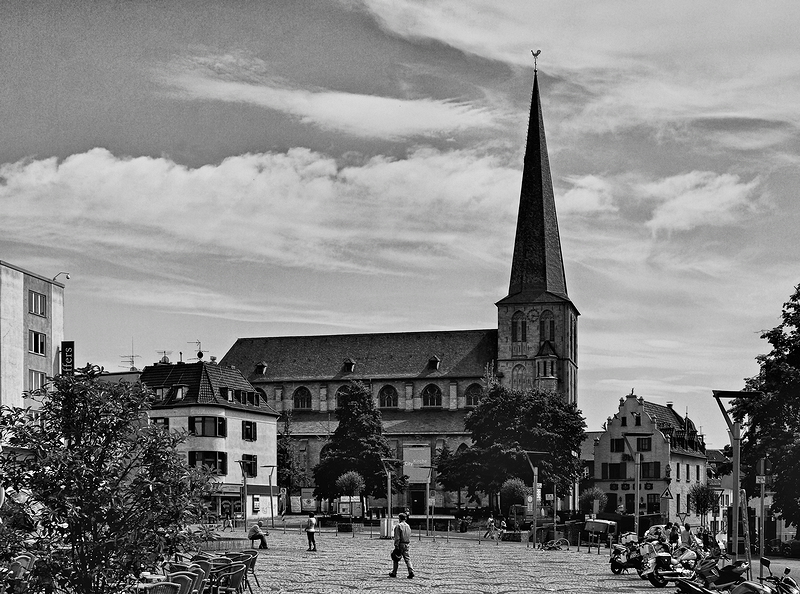 Posted by MadScientist (Düsseldorf, Germany) on 25 January 2012 in Cityscape & Urban.

Restructuring doesn’t only happen in your company: the parish of this church (the former St Assumption of Mary) moved a church further (now: St Vitus) and started an experiment which already took place in other cities of the Lower Rhine region: the former parish church became a ‘city church’, dedicated to pastoral care and thus becoming a meeting place for non-regular churchgoers. It’s an attempt to regain a connection to people who lost contact to the church or who never had one.

So the City Church of Mönchengladbach, Germany, beautifully situated at the city’s market place, built in late Gothic style around 1500, is waiting for its visitors. Unfortunately it’s in a rather bad condition, which made it a construction site for many months.

I am never sure if the re-designation of churches is a moving with the times or an admission of defeat . .

@Ronnie 2¢: The latter one. They are to make a virtue out of necessity. On the other hand, many parents try to get their children into a confessional school due to their Christian values. Thus certain attributes of faith (especially the purely cultural aspect) become a luxury good, while the masses turn away from the Church. Which makes many people seek their salvation in custom-tailored lifestyle religion surrogates. The Church isn't completely innocent of this.

@Ted: Thanks, Ted! If you don't come on weekends, it's a nice, sleepy town.

Jim from Fort Worth, United States

The tonal feel and sharpness makes it appear to be an etching. I like this look very much.

@Jim: I would even call it 'pseudo-HDR'. The colourful original looked, well, colourful, but also a bit plain. Emphasizing details and contrast, adding some polarization filter and then converting to B/W (yellow filter, I think) resulted in this image. Looks far better and more interesting than the original shot.